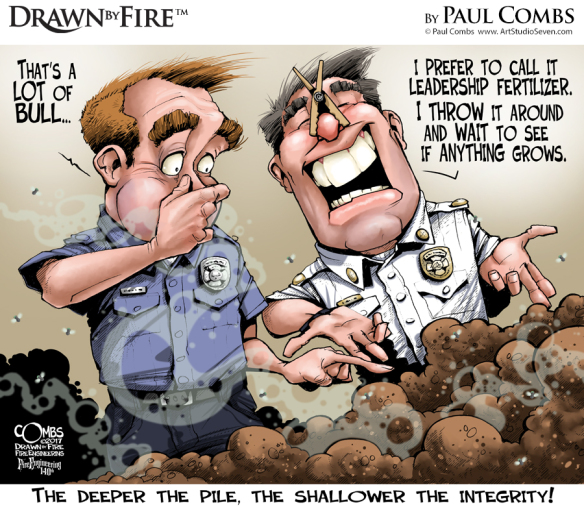 I recently heard this quote and it is one that I will keep close in memory from now on:

"Don't get on the bad side of small-minded people with a little bit of authority."

Hearing this got me thinking about why exactly that is.  Is it a case of PRIDE, that if questioned, a person feels it is a matter of insult instead of clarity?  Is it a VICTIM MENTALITY of some people to have an affinity toward thinking that if they don't understand something, that it must be a plot to harm them (Tuteur Corollary)?  Or is it more based on an authority complex where arbitrary POWER OVER-RULES COMPETENCE?

I feel like it very well could be a combination of all three.  And I've witnessed it upon numerous occasions in the fire service.  Below I've listed how I broke it down in my mind and the steps I try to take to mitigate all three elements.

I've learned that when people operate in an unprofessional manner, they have a hard time not taking things personal when called out on that behavior.  So, when questioned, they become defensive, and even possibly violent.  This doesn't foster an environment where people on this person's crew feel like they can approach them about issues they may be having.  This just perpetuates the problem by not holding those people accountable.  It takes a lot of bravery to hold people to the standard they say they set for themselves.  And it can be very difficult for that person to not take it personal.  If the tables were turned, it would be an incredible display of conscious humility to not respond as if it were a personal attack.  If steps need to be taken to confront someone about their unprofessional behavior, I feel that it is best done in an intimate, one on one environment and that communication and respect for the individual as a person rule the interaction.

Confusion and assumption are at the heart of the victim mentality.  I've met a lot of people who are of the mindset that other people do things for one of two reasons; to hurt them, or to help them.  For them there is no other motive.  These people don't accept (or understand) that people just do things because they do things.  Yes, maybe some people do things based on vindictive motives, but that doesn't mean EVERYONE does that.  I feel like it's very telling of a person who harbors this mentality.  For me, it lets me know that most likely, that's how that person operates.  I feel like clarity and a constant focus on not making assumptions are the keys to combating this mentality.  When dealing with someone who operates like this, it is important to clearly communicate your motive, eliminating the polarizing assumption that reduces what you are doing as either meant to hurt that person or help that person.

When it comes to people in leadership positions, it isn't arbitrary power that appeals to me, it's competence.  The problem with the narrative in our current society/culture is there is little distinction between power and competence.  I see it like this:

Power means: "I can hurt you and therefore I dominate"

Competence means: "I have status because I'm offering to myself and to other people, something that they see as having value."

Power is the tactic used by the incompetent to gain status.  Even though people in position of power can be influential, it's usually for the wrong reasons.  This type of "leadership" instills fear and discontent which will ultimately lead to resentment and conflict within the team dynamic.

Actions based on fear are those of small-minded people who are afraid of being shown up or found out for being inadequate or a fraud in their position.  This type of effect (Dunning-Kruger Effect) is prevalent in all kinds of organizations and it's certainly no stranger to the fire service.  It is a result of people who do well in a promotional testing setting, but when it comes to actually doing the job they said they could do, they fail miserably.  They are so blinded by a sense of self-importance and false-confidence that they don't see just how inadequate they are for the position.

A recent article in Forbes magazine describes the Dunning-Kruger Effect as such:

"Coined in 1999 by then-Cornell psychologists David Dunning and Justin Kruger, the eponymous Dunning-Kruger Effect is a cognitive bias whereby people who are incompetent at something are unable to recognize their own incompetence. And not only do they fail to recognize their incompetence, they’re also likely to feel confident that they actually are competent."

Competence is the tool used by the morally oriented to accrue authority and do good things in the world.  A competent person usually has the insight to understand that there is always something more they can learn.  Once you find yourself thinking, "I'm the best at this" or "No one knows more than me on this topic", it's time to take a long look in the mirror.  Battling this type of mentality is tricky and it's how I've found myself on the bad side of people who are more than content with complacency and status quo.  Complacency kills firefighters.  Being okay with the minimal is merely existing, not contributing.  The only way to manage your way out of merely existing is to answer the call to something higher than yourself, to work toward something that drives you from a moral standpoint.  I feel like the way to combat the power without competence complex is to maintain the personal mission of growth in skill and knowledge.  Read.  Learn.  Train.  Repeat.  Lead by example and let the haters hate.  If you know in your heart that what you're doing is right and beneficial to the members on your team, keep holding strong.

All of us who wear the uniform and took the oath swore to do our best and be professional.  Those are the things I focus on every time I put on the uniform.  I try every shift to live to a physical standard so that I can do the things that I am trained to do, and try to live by the professional standard to do those things I said I would.

In a battle between power vs. competence, don't let integrity be the victim.

As always, please like/share/comment!  Growth as an organization and as an individual is based on quality dialogue!  I would love to hear your experiences with these challenges and how you battled them.  I'm always looking for more tools to put into my toolbox.  Thanks for reading and as always #BeHardToKill