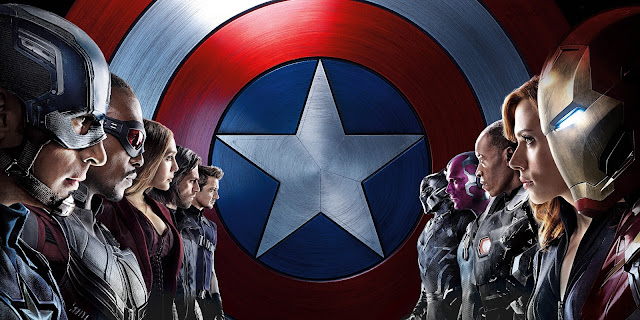 No matter how good you think you are, you are flawed.  We all are.  We are human and it's in our nature to be that way.  If you're a SUPER-human, does that mean you're immune to those flaws?  The events that play out in Captain America: Civil War gives us the answer to that question.

While Cap, Wanda, and Sam are in Lagos, making efforts to locate and stop Brock "Crossbones" Rumlow (Previeous S.H.I.E.L.D. agent and double-agent for Hydra) from obtaining a biological weapon, things play out well...mostly.  As Cap has Rumlow defeated, Rumlow presses on Cap's emotional vulnerability with details of his friend Bucky aka The Winter Soldier, distracting him.  Rumlow detonates an explosive in hopes of taking Cap out with him.  Unfortunately for Rumlow, Wanda confines the explosion to just Rumlow.  Lifting him up to remove him (& the resulting blast) from innocent civilians, she loses control of her powers which ends in the explosion taking out a significant portion of a nearby building, killing dozens of people.

In moments like this, where you are honestly trying to do what's right and what you feel is the best option for the situation, sometimes we still fall short.  Guilt may weave it's way into our thoughts, and I honestly feel that's a part of what drives us to learn from our mistakes.  The key is to not dwell on that guilt or those mistakes.  Don't let it consume you.  Save who you can; sometimes that doesn't mean you can save everyone.

As a result of the unchecked actions of The Avengers, as good as their intentions are, the United Nations comes to an agreement that they must have a system of overwatch put in place.  The UN feels that accountability needs to happen under a flag of compromise and reassurance.  However, the resulting "Sokovia Accords", that have been signed by 117 countries, just shifts the blame from the people and figures who should be truly held accountable to those trying to stop catastrophic and world-ending events from taking place.  Ultimately, signing the accords would remove the team's ability to make choices on what they involve themselves in based on their organization's values.

How is this any different than that of labor/management relations?  Surrendering your right to choose eliminates your opportunity for growth, as an organization, and as an individual.  Passively succumbing to something that will "just happen anyway" is lazy leadership.  Witnessing people make decisions (or NOT make decisions) out of fear of the repercussions is dangerous.  Such decisions are based off pure emotion and aren't calculated in any way which puts people in danger.  In the fire service we operate under a risk management model: We will risk our lives a lot, in a highly calculated and controlled manner, to protect a savable human life.  We will risk our lives a little, in a highly calculated and controlled manner, to protect savable property.  We will not risk our lives at all to protect lives or property that are already lost.  Actions must be based on calculated risk vs benefit.  This risk management model allows us to operate safely in otherwise unsafe situations.  We are only as successful as we are willing to adhere to this model.

Captain Rogers makes a stand against the accords and finds himself supported by a small group of people which ultimately divides the Avengers into two teams, fighting for what they feel is right.  One  side, Steve Rogers who disagrees with the idea of indentured servitude and Tony Stark whose fear-based decision-making guides him to turn a blind eye to the truth and signs the accords.  This is where friendship and dedication to your crew are solidified or broken.  Sometimes they SHOULD be broken.  Sometimes a line needs to be drawn in the sand to find out who people really are.  Sometimes people need dramatic examples to shake them out of apathy.  Once that line has been drawn, the people you see at your sides are typically those who base their actions on truth and vulnerability that can only happen where mutual respect exists.

As a crew, you should be willing to talk about the hard things without taking it personal and allowing your emotions to control you.  As first-responders, we see some of the worst situations that can be seen by people.  How can we expect to go through those hard things together if we can't even have a simple conversation about hard things that might be challenging the team as a whole.  All it can do is make your team stronger.  And if it causes people to want to leave the team, aren't both of you better off for it?

I've really enjoyed writing this Lessons Learned series and will look for opportunities to do more in the future.  I've never really fit in, not even in the fire service.  I am motivated by progress, not hindered by a false sense of "tradition".  My faith is in people, individuals.  I've learned over the years to be conservative with who I place that faith in.  For the most part, those I've exercised faith in haven't let me down, so I do everything I can not to let them down either.  If they need me, I'll be there.

One of the most important principles that has stayed with me since I first read it in the Civil War series was where Captain America delivers this speech:

I hope you've enjoyed this series!  Please like, share and comment, I'd love to hear your thoughts as I am a man who appreciates perspective.  As always, be hard to kill.